Dinner and a Movie: Omaha Steaks teams with Amazon Prime Video on Tom Clancy's Without Remorse for an action-packed night at home

(Omaha, Neb., April 16, 2021) Tom Clancy's Without Remorse action thriller starring Michael B. Jordan as US Navy SEAL John Clark premieres on Amazon Prime Video April 30. To make it a night at home to remember, Omaha Steaks has teamed with Amazon Prime Video for the ultimate dinner and a movie experience.

The specially-priced movie meal kit launched today on OmahaSteaks.com and on Omaha Steaks' Amazon store for $99.99 when purchased before the premiere of the movie. After the premiere, the package is available until May 14 for $119.99. Each kit feeds four people and includes:

An elite Navy SEAL uncovers an international conspiracy while seeking justice for the murder of his pregnant wife in Tom Clancy’s Without Remorse, the explosive origin story of action hero John Clark — one of the most popular characters in the best-selling author’s Jack Ryan universe. When a squad of Russian soldiers kills his family in retaliation for his role in a top-secret operation, Sr. Chief John Kelly (Michael B. Jordan) pursues the assassins at all costs. Joining forces with a fellow SEAL (Jodie Turner-Smith) and a shadowy CIA agent (Jamie Bell), Kelly’s mission unwittingly exposes a covert plot that threatens to engulf the U.S. and Russia in an all-out war. Torn between personal honor and loyalty to his country, Kelly must fight his enemies without remorse if he hopes to avert disaster and reveal the powerful figures behind the conspiracy.

Omaha Steaks, America’s Original Butcher, founded in 1917, is an Omaha, Nebraska-based, fifth-generation, family-owned company, who has a history of supporting food security through long-standing relationships with food banks, and partnerships with national organizations to provide food to those in need during natural disasters and during the pandemic. Omaha Steaks markets and distributes a wide variety of the finest quality USDA-approved, grain-fed beef and other gourmet foods including seafood, pork, poultry, slow cooker and skillet meals, side dishes, appetizers and desserts. Today, Omaha Steaks is recognized as the nation’s largest direct response marketer of premium beef and gourmet foods, available to customers by calling 1-800-228-9055, online at www.OmahaSteaks.com or at retail stores nationwide. 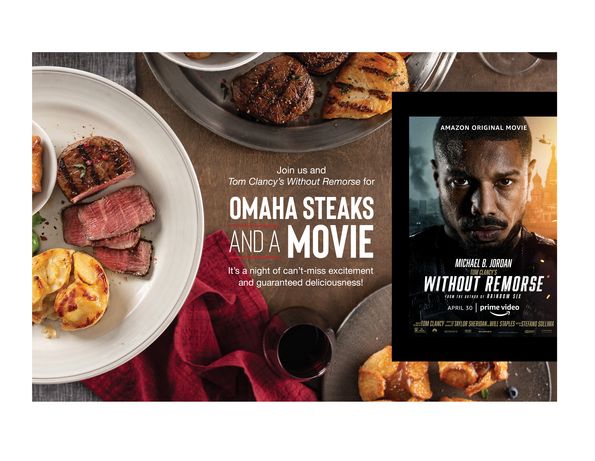